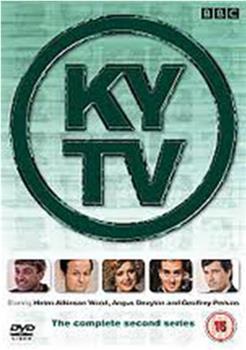 KYTV is a British television comedy show about a fictional television station that ran on BBC2 from 1989 to 1993, which satirised satellite television in the UK at the time.  The show was effectively the TV version of Radio Active, which spoofed local radio stations, and was developed by the same team.  It was written by Angus Deayton and Geoffrey Perkins, produced by Jamie Rix, ...